How Do We Solve the Broken Housing Market in The UK? 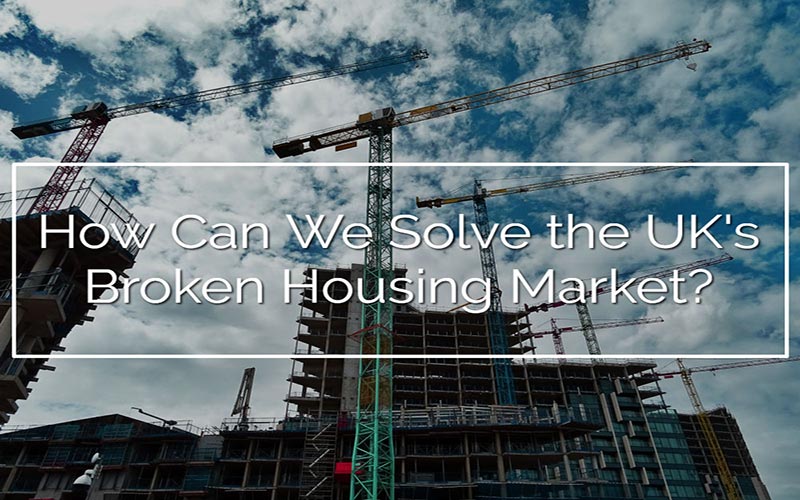 Over the last year, the housing crisis has soared to the top of the political zeitgeist as one of the most important issues of the day. The chances of home ownership for the so-called ‘millennial’ generation appears to be getting slimmer and slimmer, and as the squeeze begins to tighten for landlords and renters as well as homeowners and first-time buyers – most people now accept that something isn’t quite right with the UK’s housing market.

2018 looks set to herald further interest rate rises and a strong likelihood of central government policies aimed towards tackling house price inflation – which is all well and good but will any of this actually help landlords or have much in the way of tangible, long term positive effects on the housing market?

All of this raises one distinct question: can the government solve the housing crisis without ripping off the decent landlords across the country who are working hard to balance mortgages with their tenants’ requirements all with the long-term goal of providing for their own future? And are they willing to?

Housebuilding targets: Past and future

In 2007, the then government set a target for 240,000 homes to be built per year over the next decade. Rates have stuck beneath this rate ever since, having only recently just risen above 200,000.

In 2016-2017, 217,350 houses were built in the country. It’s not a figure to be sneered at –a significant improvement on the c.170,000 of the year before, and far above the rates we’ve been experiencing for every other year since 2007. Nonetheless, it’s still far below every housebuilding target the government has ever made – .

How many houses do we build?

The fundamental problems at the root of the housing crisis are not nearly as difficult to diagnose as you might think. The problem is finding tangible solutions to them. The truth is that we just don’t build enough homes, and for the best part of a decade, the government has failed to come up with sustainable solutions to increase the figures. The supply and demand problem

Perhaps the most important correlation we can draw from this, is not the rates of housebuilding, it’s the volatility in house building – particularly from the private sector. Supply and demand fluctuations mean that the private sector will never build a steady and regular number of houses. If house prices are low, it’s less economically desirable for the private sector to build houses. Thus, housebuilding rates drop, supply is reduced, and prices increase. As prices increase, companies are incentivised to build more houses, which in turn increases supply and prices once again drop. The cycle continues.

If that wasn’t bad enough, private housebuilders often buy up land and only develop and sell the properties on them when house prises increase. Left to its own devices, the private sector simply will not build the required number of houses at a regular, sustainable rate.

But the fact that housebuilding has been at a historic low for the last 30 years lies at the fundamental root of the problem. The truth is, successive governments have set unrealistic housebuilding targets for years, and failed to take any decisive action in achieving them – preferring to hope that the private sector will provide the homes required.

However the government decides it wants to solve the housing problem – it needs to demonstrate that it can come up with a sensible, long term strategy that will solve this supply and demand problem. Simply flooding the market with new homes creates a short term fall in housing prices – but it certainly won’t solve the long term problem and could likely also create a short term crisis for landlords, causing further disruption in the rental sector.

A short term drop in house prices would likely cause a reduction in revenue for landlords if their tenants suddenly find home ownership within their grasp, and competition increases should buy-to-let become an affordable investment for more people.

There’s been a lot of attention paid in certain parts of the press to the ‘not in my back yard’, or ‘NIMBY’ phenomenon – in essence those who resist much needed development in their local communities.

In fact, the CEO of the Town and Country Planning Association herself, Kate Henderson, claimed that the focus on local decision making in the planning permission process significantly encourages ‘Nimbyism’.

Add to this the fact that numerous housebuilders have raised the problem of high levels of regulation on housing association buildings and planning permission, and there are plenty of contemporary impediments to the private sector building more homes.

Relaxing some of these regulations would allow both private and local housing associations to gradually increase their building rates over time. For landlords, a relaxation in regulation and boxes to tick would provide the opportunity to plan a longer-term approach and the finances to go with it, bringing benefits for landlords and tenants.

This gradual, long term approach also has the benefit of actually being sustainable – meaning the losses will be worth it in a way that simply throwing money at the problem for short term political gain is unlikely to ever achieve.

The government needs a long term strategy that keeps in mind the needs of landlords and renters, addressing the supply and demand problem, creating sustainable housing for future generations and allowing landlords to do their jobs. Is this going to happen? You can probably work out the answer to that one yourselves.

The Conservative government currently faces quite the housing dilemma. Homeownership is a fundamental Conservative principle – controversial she may be, but it’s not for nothing that former Conservative Prime Minister Margaret Thatcher won three successive General Elections and some impressive Commons majorities on the back of a promise to create a ‘property owning democracy’.

Thus, the government is restricted to short term ‘bung’ fixes, like the help to buy scheme and cutting stamp duty, which may well help individual buyers afford their first house – but does nothing to solve the supply and demand disparity which lies at the root of our housing crisis.

For these reasons, we’re not convinced that we’re going to see any fundamental changes in the industry any time soon. Despite dedicating a significant chunk of her latest conference speech to fixing ‘our broken housing market’, Theresa May hasn’t shown many signs of addressing the most fundamental roots of the problem.

If you ask us, it’s up to tenants, landlords and buyers alike to plan as best they can for their future. Save money, make sensible financial decisions and set realistic home ownership goals.

Here at LetBritain, we and other internet estate agents are reforming the tenancy sector by eliminating the bureaucracy and unnecessary fees of high street letting agents.

If you’re a landlord or a tenant, sign up to LetBritain here to save money on your next rental.